More
This page is dedicated to the Angels that will always be with us.

"Brief were my days among you

I now go with the wind

Be not down with sadness

I'm back where I began."

Jack  was Euthanized on Sunday June 3rd. He had severe Wobblers and Cellulitis-was losing strength in all of his legs. Could not let him suffer anymore. We are devastated as this dog never had anyone but us to love him. RIP Our Precious BOY-We loved you so. 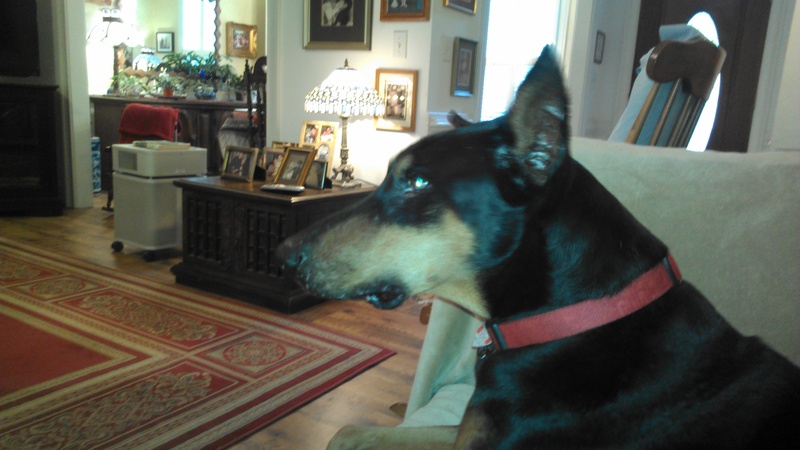 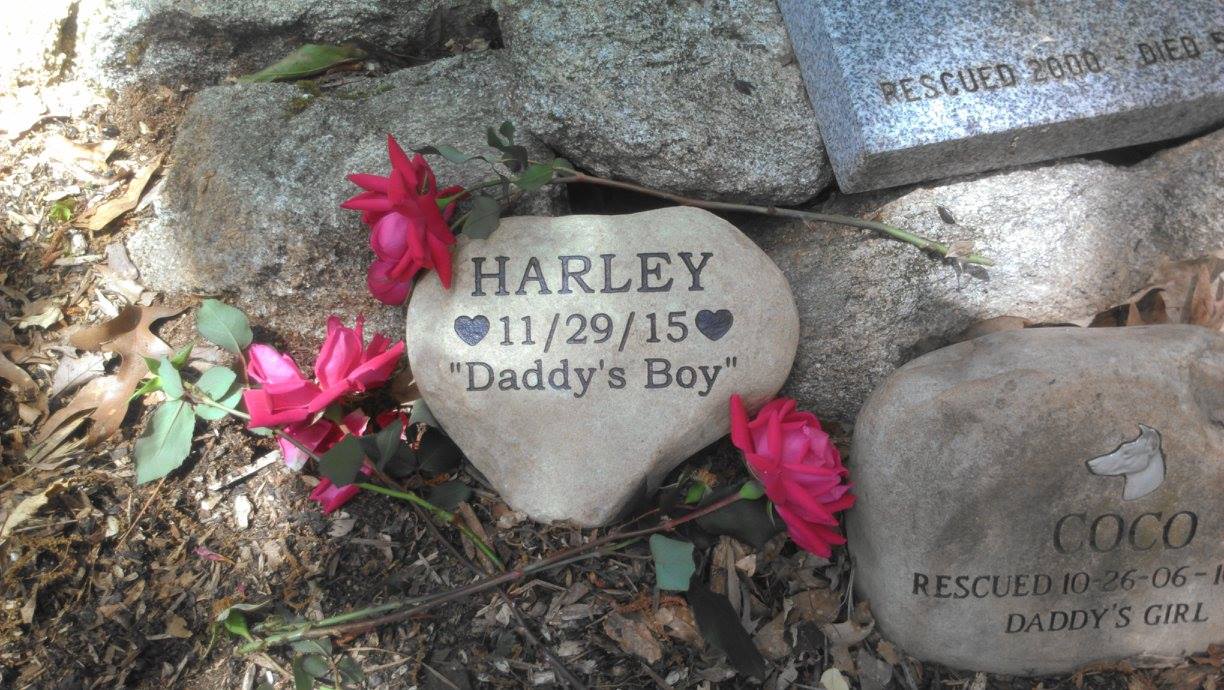 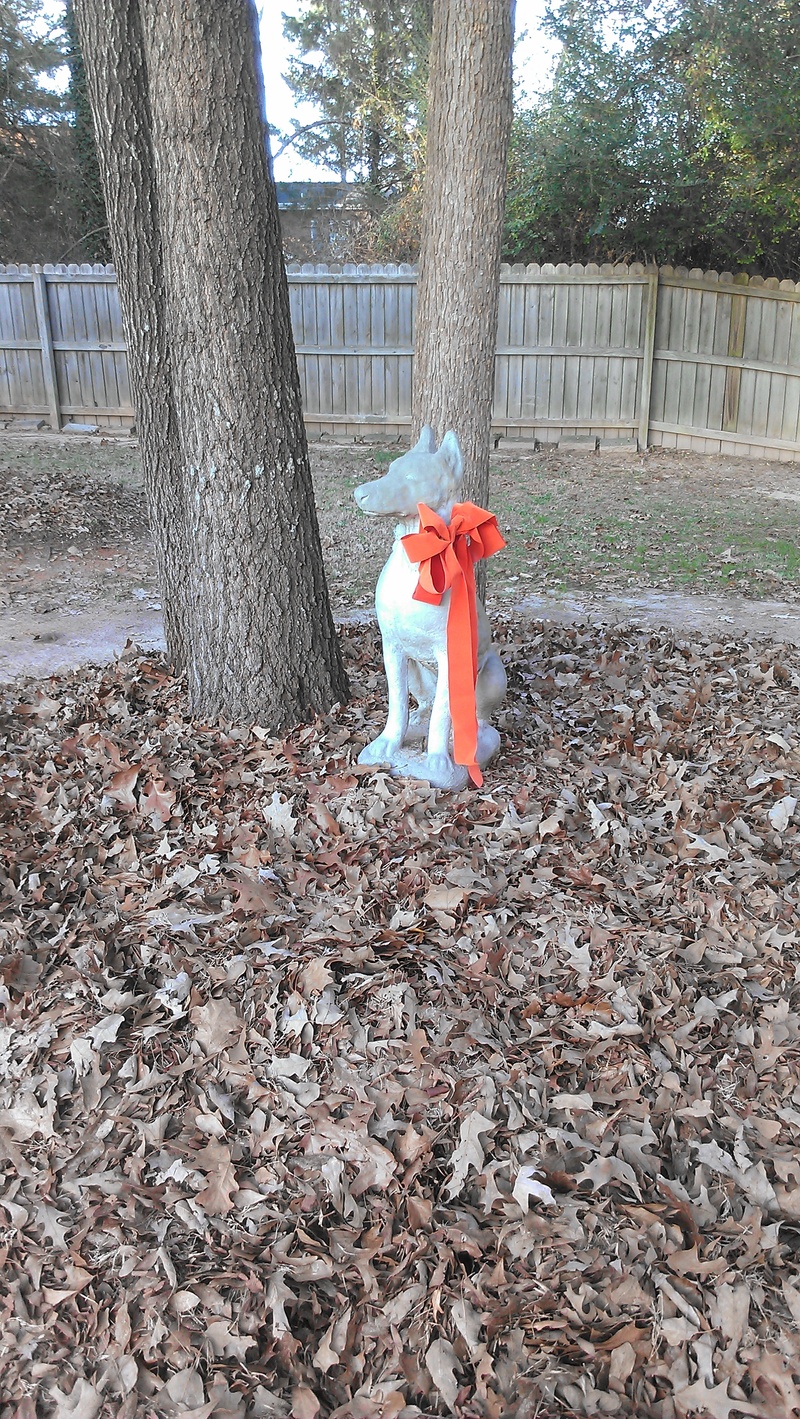 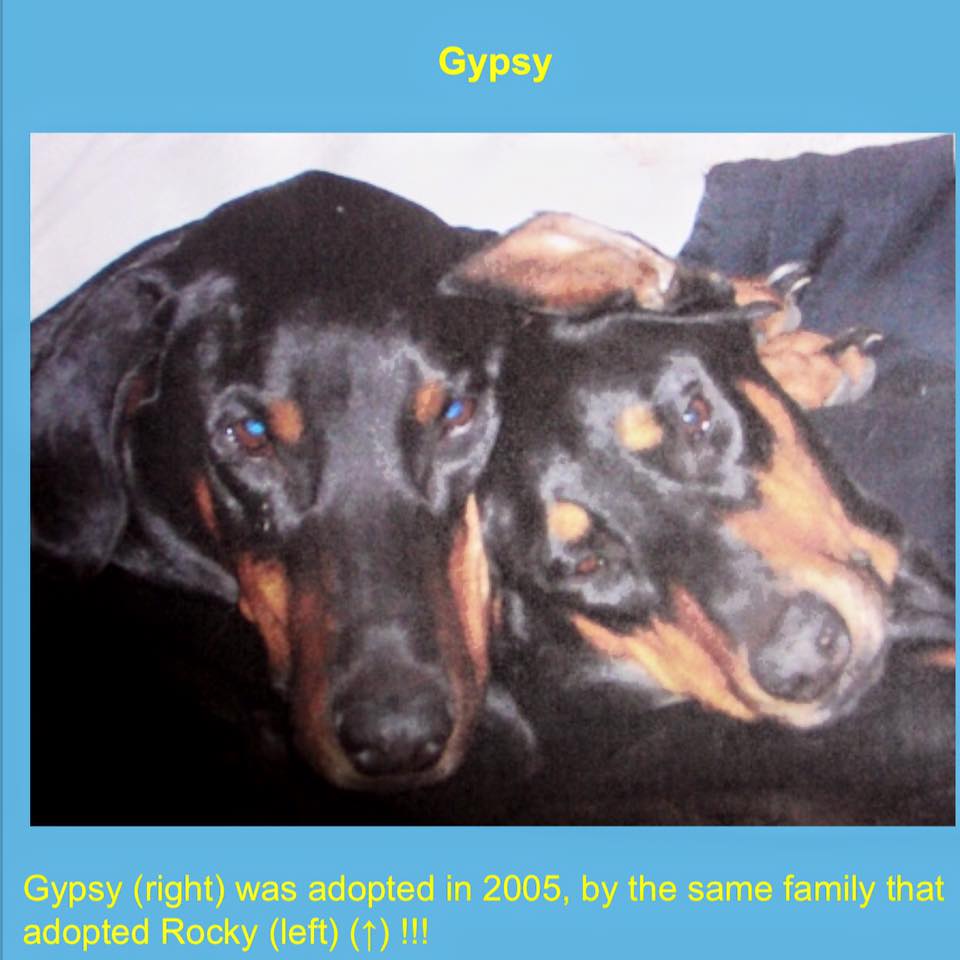 This is a memorial to a beautiful dog and her mate that were adopted from Doberman Rescue of Rockdale, Inc. 12 years ago.  She died today March 28, 2016.  Rocky I believe died a year ago.  From the beginning these two precious dogs were inseparable.  I turned down at least 10 or more people that wanted them.  The minute Matt and Alia came up I knew they were the right fit.  My heart is broken for their sadness - but I know she had a wonderful life.

Run with Rocky my beautiful girl - you were loved!!!! 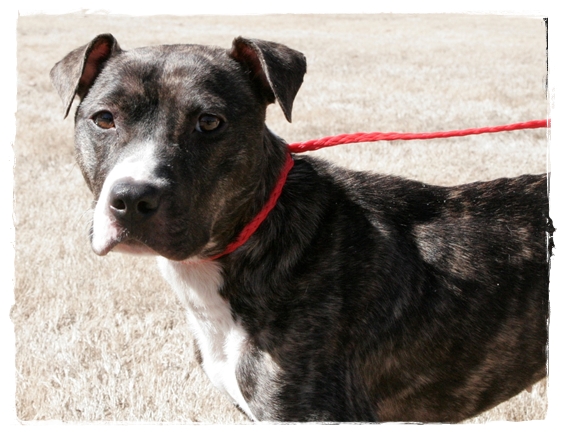 Poppi's death was due to negligence of vet Dr. Ray Crain & staff of Rockdale Animal Hospital in Conyers, GA.

Dr Crain related to our rescue on phone the Monday after she died on Friday she had ingested a plastic toy and blanket and vomiting and spitting up blood.

This puppy suffered for 3 days before anything was done to help her.

By then it was too late and Dr. Crain not only did exploratory surgery but also spayed a dying puppy. He stated he was too tired before then to do anything???

The entire vet bill for this dog was already covered by other rescue sponsors.

No one called us that she was ill, no one got permission to do surgery, no one told us she died on the Friday -before Dr. Crain called us the following Monday .

Our hearts are broken -- Pet owners beware of this vet and this practice - they don't care!!!!! 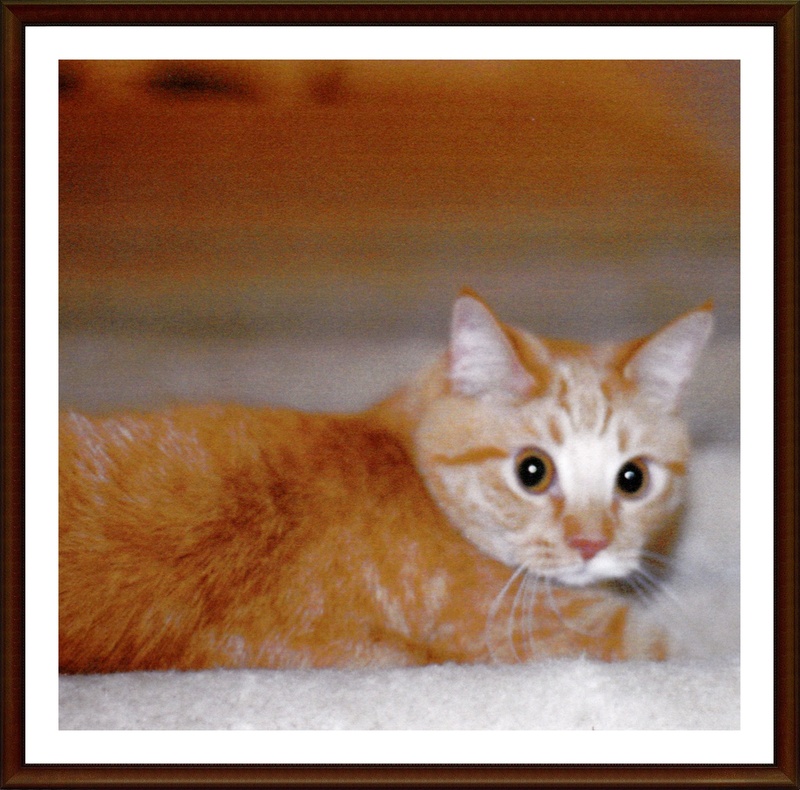 Rowdy and his sister were rescued from a horse stable when he was 5 weeks old. A precious tiny little orange ball of fur.
Very attached to his sister Savannah, he has always been a loving, sweet, playful boy . Even when at the Vets, getting fluids or shots HE WOULD ALWAYS PURR. When his sister would be sick he would bath her.
During his long life he has overcome Diabetes, Hyperthyroidism, Pancreatitis, and finally kidney failure, which he had for the last year and then went into heart failure. I can still remember that precious face running up on the table when we used to give him his fluids 2-3 times a week this last year -and purring all the time to the Tech.
Rowdy had a special talent - he was a thief. He would steal jewelry, credit cards, chapsticks, baseball caps,
loaves of bread, pencils....whatever he needed and hide them under a chaise in the living room. Never eating or destroying them just sitting in front of his stash and hiding with it. It was really hilarious!!  He would do this right in front of you.
He was so lovable that when we would take him to the Vet they would hold him up in the reception room for everyone to see . He loved it and them.  My heart aches for that little touch he gave me and the rolling on his back for a rub.
My precious Boy - God will keep you safe for us - till we meet again---for a hug.
Mom, Dad, & Savannah
Magic 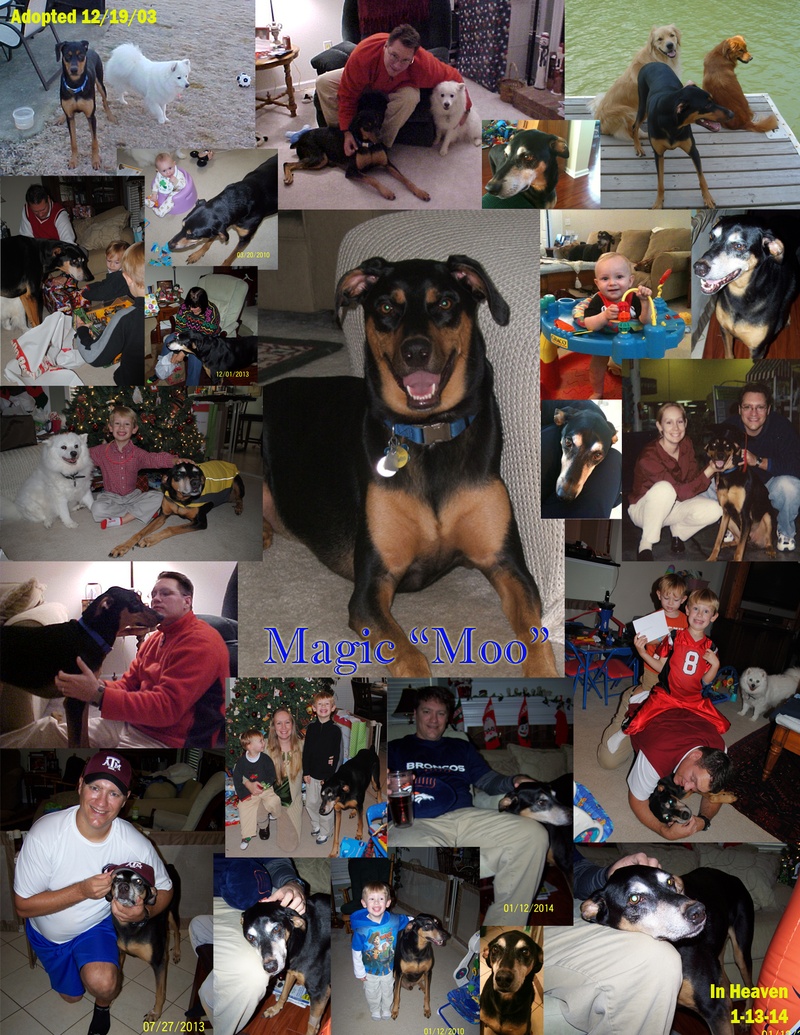 We adopted Magic as my husband's Christmas present in 2003. He grew up with Dobermans and waited patiently until we got married and bought a house to adopt a new one. Magic was 7 months old and full of life and energy.  We fell in love immediately.  We brought him home and he met his 2 yr old new sister Abby, an American Eskimo.   They became best friends and Magic was lost without her.
Magic's favorite pastime was chasing his nemesis the chipmunk in our backyard.  He could be sound asleep, but if you said "chipmunk" his ears would perk up and he would jump up for the chase.  He loved going on walks, but loved being by your side at all times.  He would gently nudge his head under any idle hands - for they should be petting him.
Magic passed away suddenly from a ruptured tumor on his spleen on January 13, 2014.  Although we miss him terribly, we are so grateful to have had him for 10 wonderful years.

"MY HEART IS WARMED WHEN I ADOPT TO A FAMILY THAT LOVES A DOG THIS MUCH." 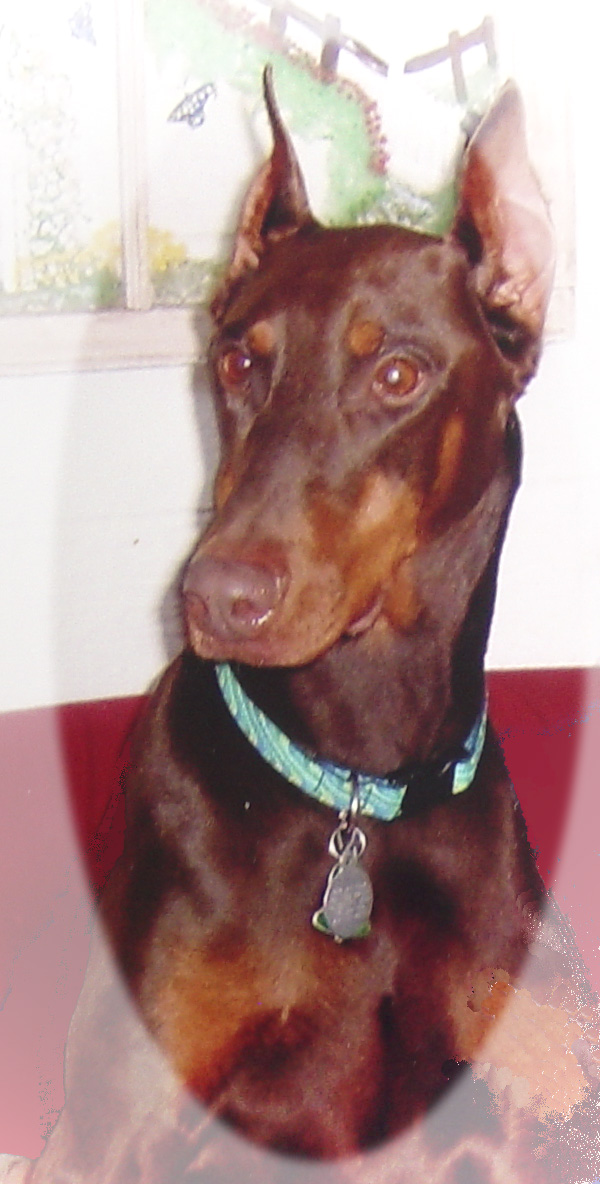 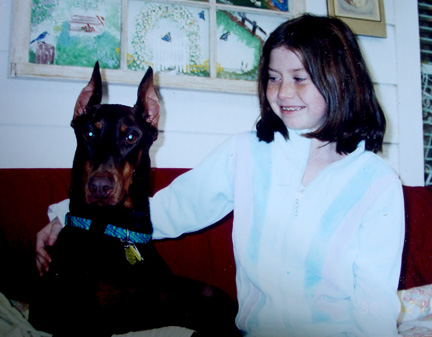 CoCo was rescued from Animal Control in South Georgia, she was emaciated and very sick. She had Gastroenteritis, ear infections, diarrhea and skin issues. It took us 6 months to get weight on her and to say she was healthy again.
She was the SUNSHINE in our home. Our male Doberman Astro had just lost his Female Love, Dolly, a few months earlier and he was still grieving when CoCo came to live with us. I can still see her sleeping with our Grandchildren on a blowup mattress - under the covers and with her head on a pillow. There are dogs - and then there is a Princess. She was truly a Princess. She loved everyone.  CoCo died of Osteosarcoma (Bone Cancer). From the time of diagnosis she only had 28 days of pain medications and infusions as it had already spread to her lungs and chest.

TO CoCo:
I NEED TO KNOW YOU ARE OK LATE INTO THE NIGHT
ARE ANGEL WINGS AROUND YOU?
HAVE YOU TAKEN FLIGHT?
OUR HEARTS WILL NOT RECOVER
WITHOUT THAT PRECIOUS FACE
THE ONLY WAY TO LET YOU GO
WAS TO STOP YOUR PAIN
AND SEEK A BETTER PLACE.
BE PEACEFUL-MY PRINCESS.

Rusty was adopted in July 2009 by Mike Hedge, who also adopted Jolie from our rescue.  Rusty immediately bonded with Mike's Mom and slept with her every night.  He was a wonderful, sweet boy and loved his family.  Sadly Rusty became very ill in February 2012 with Acute Pancreatitis.  He spent many days at an emergency clinic and then saw a specialist and had to be put down.  This is a very painful condition and he would not have ever been the same or functioned the same after this attack.  We all grieve with Mike and his Mom as this dog had many changes before and after he was rescued.  His life with the Hedges was loving and he enjoyed his playtime with Jolie.  Rusty was only 4 years old.  Our hearts are heavy with his loss.

Thank you Mike and Barbara for loving him. 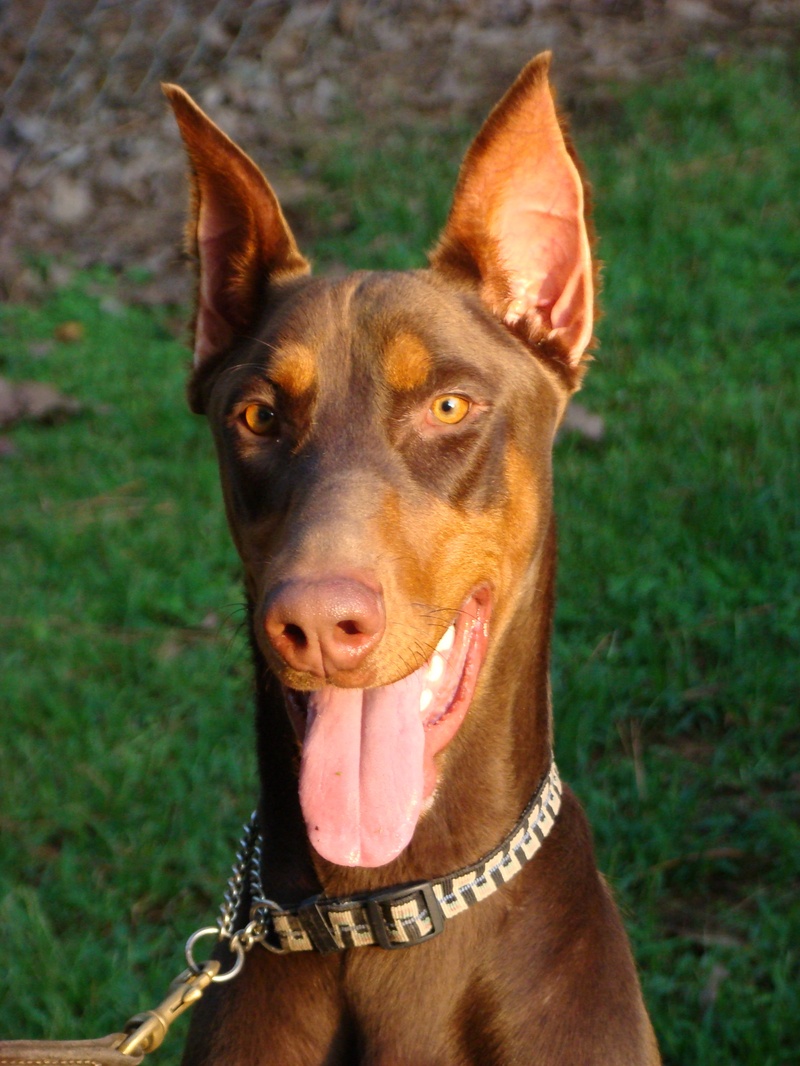 On May 28th, 2009 Carole lost her beloved Astro to Lymphoma.  Astro was rescued from animal control in 2000, weighing less than 50lbs.  The vets and I did not think that he was going to survive. His body literally shook for a year. We had no idea what his history was, but we knew it wasn't good. But he rallied.

He became Carole's constant companion. They visited schools, businesses, and nursing homes.  Astro loved everyone and everyone loved him. He welcomed every new rescue into his home as if to say, "It is okay, you are safe now."

Carole loves all her dogs, but she will never love any dog the way she loved Astro. They were truly soul mates. He was smarter than most people and could read people instinctively.

"He was my precious boy, and truly a Noble Doberman in every sense of the word. I know there will be no Thunderstorms in Heaven with you there. Rest... My Precious boy,      Mom 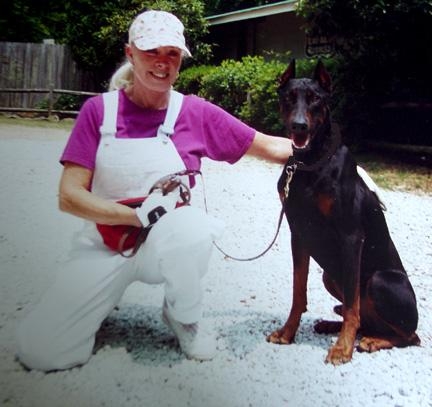 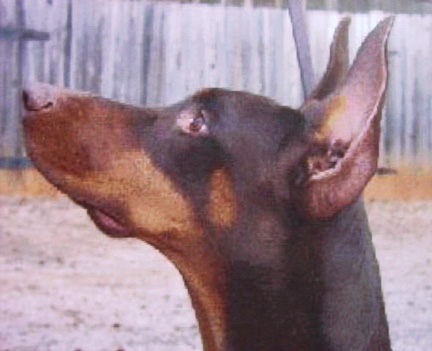 This is a tribute to a beautiful, wonderful Doberman.
Vick had a nobility about him that was obvious from the day I rescued him from Cobb County Animal Control.
He knew who he liked and who he didn't like and he let you know it.He latched onto my heart and never let go.
I passed up over 50 adopters before I adopted him to anyone. I knew I had to let him choose his new parents.
He Did. The day Rick Wakefield and Rebecca Abernathy came to see Vick, his ears perked up, his tails wagged and to me he smiled. He had a wonderful life with them and lived on their horse farms. Both are practicing attorneys and he often went to work with them. He also loved camping.Vick is one of the few rescues I actually cried when I adopted to someone. I already loved him-but I knew it was the right placement. Rebecca has kept in constant touch with me and shared pictures and funny stories of Vick. I am saddened and tearful upon hearing of his death.

Rebecca and Rick WE WILL ALL MOURN YOUR LOSS.

RUN AND PLAY OUR BEAUTIFUL BOY 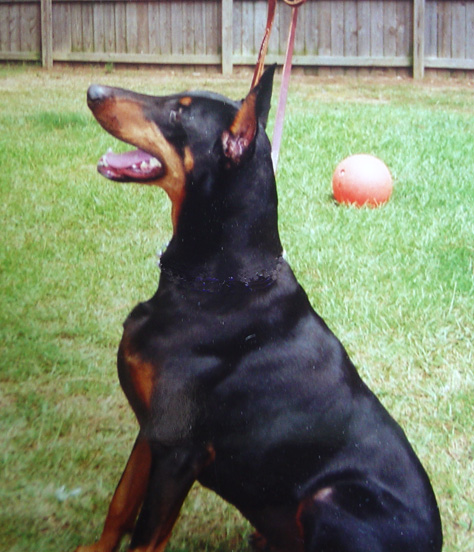 When Dolly was rescued, Carole not only fell in love with her, so did her male dobie, Astro. Dolly passed away in 2006 of Mesotheoloma. 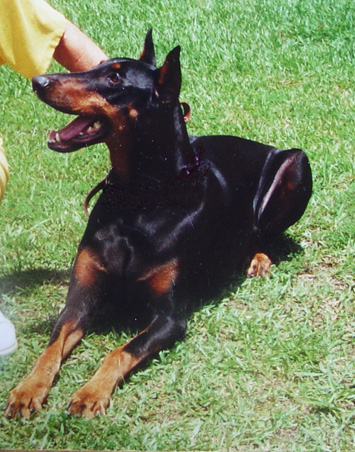 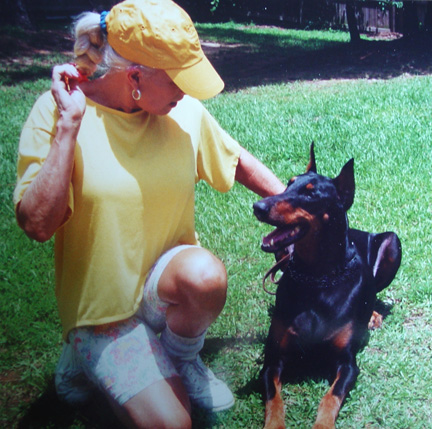 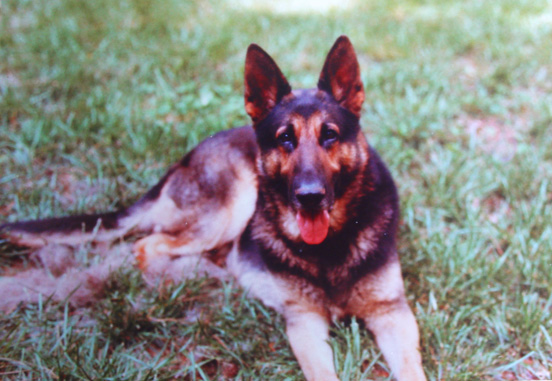 Caesar was Carole's Hero. He was her Champion German Shepherd.